It has long been known that airborne dust, i.e. small particles in the air originating from combustion processes and other sources, poses a serious health problem. According to figures from Statistics Norway (SSB) emissions from wood-fired stoves and fireplaces account for over 60 percent of the total emission of particulates in Norway and, on cold winter days, wood-firing can be the largest local contributor to poor air quality in towns and cities.

This is of course not a uniquely Norwegian phenomenon, and the challenges that Norway face can be transferred to all towns and cities where wood-firing is extensively used to heat homes. According to the European Environment Agency, a considerable proportion of Europe's population live in areas, particularly towns and cities, where air quality criteria are exceeded – where airborne dust in particular has been identified as a source of air pollution which entails serious health risks.

However, although the media love to come up with dramatic headlines relating to wood firing, there is broad agreement amongst many experts that the solution is obvious: Replacing old stoves with new, clean burn wood stoves and fireplaces. Replacing old fireplaces with new ones will solve the problem!

This also means that anyone who is dreaming of installing a new, clean burn wood stove or fireplace in their apartment or holiday cabin, but having second thoughts because of what they have heard or read about the airborne dust problem, can breathe easily, secure in the knowledge that their stove or fireplace is not polluting the air, either for them or for anyone else.

Wood is a renewable resource

Wood is also a renewable resource, and wood-firing is considered to be climate-friendly. CO2 which is released during combustion is absorbed by the trees and utilized in the natural CO2 cycle, according to organizations such as ENOVA (which works to convert Norway into a low-emission country) and Norsk Varme, the industry association for environmentally friendly stoves, fireplaces and chimneys in Norway. Friends of the Earth Norway (Norway's oldest nature and environmental protection organization) believes that using the correct wood-firing procedure with a clean burn stove offers many environmental benefits.

Check out how to fire more environmentally friendly.

Norway was the first country anywhere in the world to both impose emission requirements and develop more efficient clean burn stoves. This stems from a major study amongst consumers which showed that many people choked their stoves as much as possible in order to save wood. In turn, this resulted in emissions of large quantities of particulate matter (PM). In other words, airborne particles which pose a major health risk when inhaled.

Emissions no other manufacturer can match

The requirement from the Norwegian authorities for modern stoves is that they must emit no more than 10 grams of particulate matter for every kilogram of wood that is burned. However, we have taken the concept of “clean burn” to a far more environmentally friendly level, and now manufacture stoves with emissions less than half the statutory requirement. Some models can even boast emissions as low as 1.9 grams, a level which no other manufacturer can match. The reason is a constant focus on product development and innovation, explains Rene Christensen, our Senior Vice President Sales and Marketing. 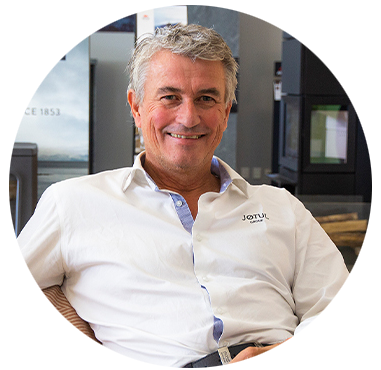 Yes, this is about our societal mission. That is why the environment and climate are a major part of Jøtul's DNA. Every year, the company spends heavily on research and testing, and, thanks to our Clean burn Technology, we can quote emissions up to 90 % lower than those of older stoves.

What is Clean burn Technology?

Clean burn Technology essentially means that the stoves have a double combustion chamber, which also burns the finer particles. A Jøtul stove will therefore give you cosiness, warmth and environmentally friendly firing. Given that we are also the only manufacturer anywhere in the world to manufacture wood stoves and fireplace inserts using renewable energy in the form of Norwegian hydropower, and that we recover old cast iron stoves and melt them down to produce new, clean burn versions, there are additional arguments for lighting up with a clear conscience. The fact that clean burn technology produces 30 percent more heat per log than older stoves is yet another bonus!

Wood-firing - a climate-friendly alternative!
Environmentally aware with Clean burn Technology
Recirculated heat from Jøtul
How can we overcome the problem of airborne dust?
Wood-burning is environmentally concious and financially profitable